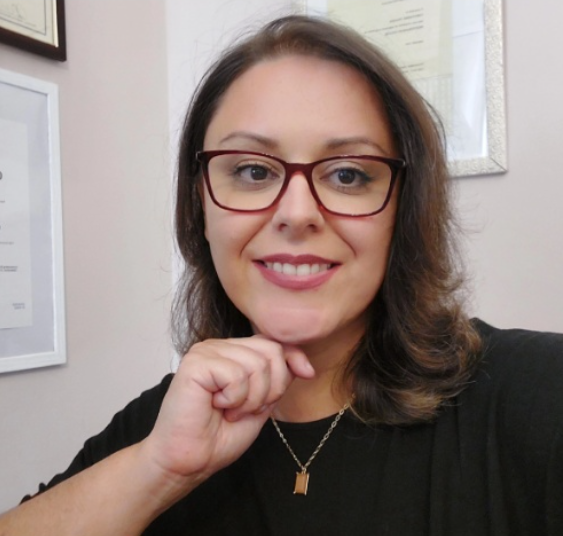 English, Italian and Greek-speaking Counsellor. Member of the "British Association for Counselling & Psychotherapy" and a registered member of the Holistic Cultural Centre "Erba Sacra" of Rome as a Counsellor (level: Trainer). She has a Bachelor Degree in "Acting" and an International H.N.D. BTEC Edexcel (level 5) in "Counselling & Psychology". Over the years, she's been also trained in Bioenergetic Analysis, Drama Therapy and Gender Anti Violence Consultancy.

For more than eight years, she's been involved as a Counsellor, an Acting Coach, a Language Counsellor and a Foreign Language Tutor.
Even though she uses many traditional methods, she considers herself as a "Holistic Counsellor" because she is keen to address the individuals in terms of their mind, spirit, and body. She blends traditional therapeutic approaches with complementary and alternative methods such as Bioenergetics or Psychodrama techniques. She prefers to have a bio/psycho/social/spiritual approach to treatment, considering the individual as a "whole person" rather than focusing on the one and only aspect of illnesses. That comes from the fact that she deeply believes that a human being is a thousand ideas put together, a thousand lives at the same time, and a thousand worlds...a creature that has the ability to be reborn from the ashes like a small phoenix, fly free, die and be reborn every time different.

As a professional, she has always considered the use of art in therapeutic contexts to be the smartest path to follow. The fact that she is an artist perhaps does not make her thought objective enough, but to support it comes the ancient wisdom of her Mediterranean origins, capable of placing therapeutic centres next to theatres!

So, after finishing her studies in acting in one of the most prestigious Drama schools of Athens, something prompted her to go further and seek the secrets of the human soul. It was at that point that she seriously started thinking about a career path related to helping others.
Perhaps it was the magic of theatre that pushed her towards psychology, through its multiple expressive qualities leading individuals to get to know themselves better, or maybe it was only the fact that when she was 18 years old she felt so disoriented that she fell ill with panic attacks. Who knows? The fact is that her decision led her to the world of education again.

She was accepted to the Psychology School of the Mediterranean College of Athens and at the same time continued with her acting studies, researching the cathartic techniques of the ancient Greek Drama (Tragedy & Comedy). After her Counselling studies, she did her practice at the Anti-violence Women Centre of Athens "Αλληλεγγύη" and the "Alternative Therapy Centre" of Corfu.

The most interesting experience for her was when she collaborated with local TV channels as a drama therapist, presenting and explaining to the audience the benefits of theatre on a psychological level. Even though she was young, she was considered a kind of pioneer at the time. In an era where the schools of Drama Therapy were scarce, at least in the Mediterranean area, talking about this topic publicly made a great impact.

Shortly after, she moved to Italy and started working for the cultural association ISTA of Taranto in Apulia (South Italy) as an Acting Coach and a Drama therapist.

Her method as an Acting Coach-Counselor is "psychosomatic" and involves an artistic space in which the person is freed from his automatisms, a space in which the resources of the body, the bodily experience and our emotions are rediscovered. It is an ideal place for the transformation of consciousness, a different kind of training that is proposed as a transitional area in which man is seen in his integrity, as a physical, mental and spiritual totality. The aim is to reconstruct the unity of experience through a new methodology capable of integrating mind and body, real and imaginary, nature and culture, discipline and pleasure, individuality and collectivity.

Christiana Troussa is a freelance Counsellor since 2018 and collaborates with different online and offline realities.

Are you a Therapist or Counsellor?

No subscription fees, protection against cancellations and no-shows, and
more visibility on Google and Social Media are just a few of the reasons
you should join us at UK Therapy Guide.